There is an unequivocal spring in my step this morning. I’m walking to pick up my new electric bike, which will replace my old electric bike, which was stolen. The sky is infinitely blue and there is a comfortable breeze just strong enough that I never break a sweat. I click play on an ABC Radio National (RN) podcast with Sana Qadar, which centres on the toxic effects of excessive positivity. “Losing my job and feeling anxious about the pandemic was exacerbated by my living arrangements at the time; I was living with a yoga instructor who kept telling me I could manifest my troubles away”, the guest of the episode tells Qadar.

The relevance of this episode’s topic, selected at random, is so pertinent I stop walking to send my sister a voice message. It was only yesterday evening the two of us attended a family function with distant relatives. One relative, a young man who has recently pivoted careers to that of The Yoga Instructor, was of particular interest to me. Over the past few months, I’ve noticed a shift in his online presence, where he has adopted a new and authoritarian tone. The uncanniness of this episode lies in the fact that just last night I sat between my sister and this distant relative. He advised my sister that she should have “affirmed away” the gastro that recently tore through her family. He also suggested she needn’t be stressed about her son’s recent high functioning autism diagnosis, as she can just “manifest positive vibes”. Qadar identifies this attitude, the “everything will be fine”, “it could be worse”, “look on the bright side” attitude, as a shocking and unhelpful outcome of the positivity movement that has recently taken the world by storm.

The issue with ‘positive vibes only’ 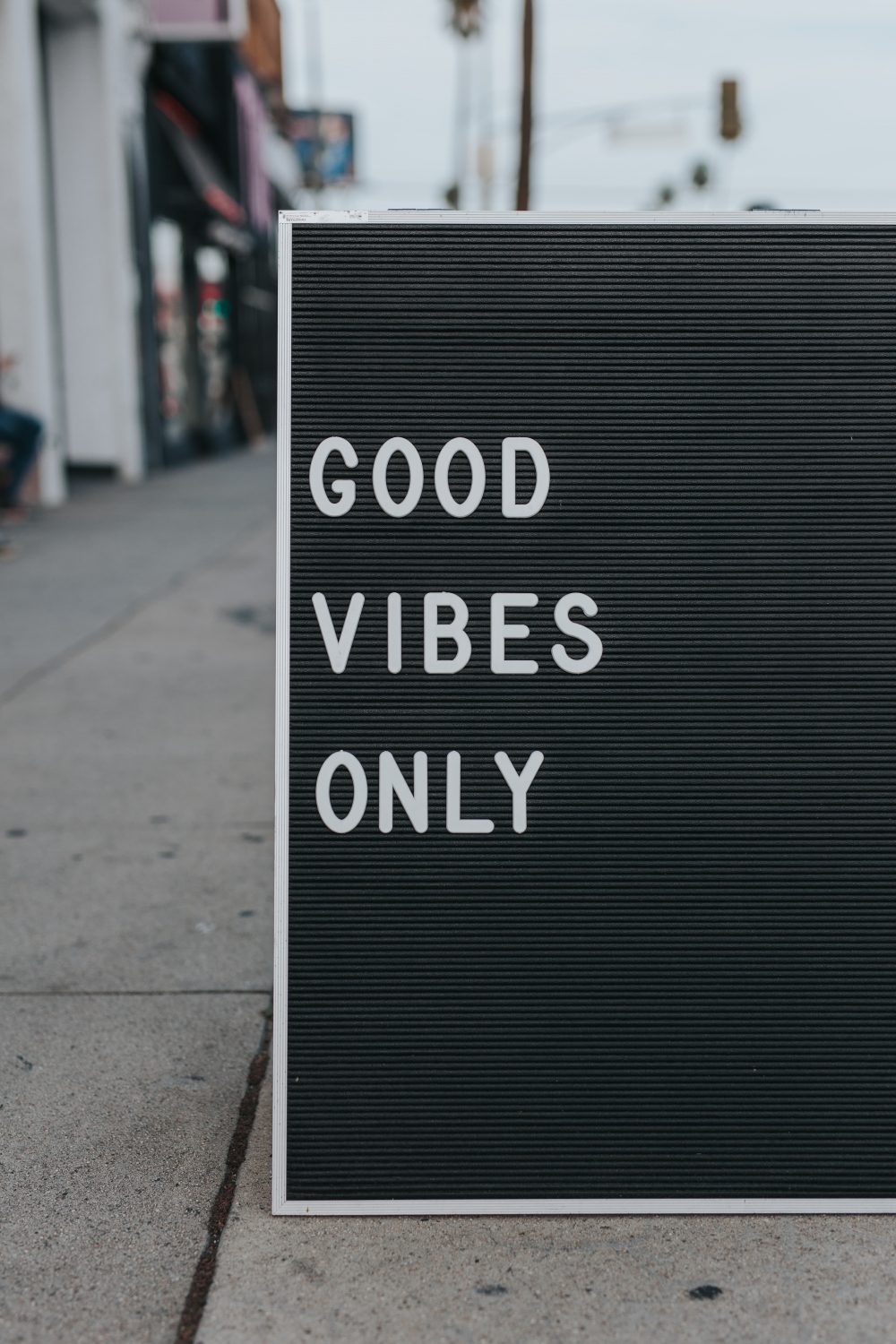 Cafes and shops in my suburb often create Instagram posts or write on their chalkboard ‘positive vibes only’.  However, experts caution we have gone overboard with this sentiment. There’s nothing wrong with trying to see the silver lining, as in fact practicing gratitude in difficult situations can be a very valuable coping strategy. However, too much forced positivity isn’t just a little unhelpful at times, it is toxic.

Toxic positivity is defined as excessive and unhelpful overgeneralization of a happy, optimistic state across all situations. It has two ways of potentially being harmful when applied to every person in every situation. Firstly, it invalidates people’s genuine emotional response to certain experiences, which might be an understandable and even helpful reaction to difficulty. That is, sometimes, bad things happen, and not feeling happy about it is a natural response with a helpful function. Secondly, it suggests negative emotional states are taboo and a symbol of failure. If you’ve ever had the thought you ‘shouldn’t feel this way’, this is an example.

By shutting down a person’s emotional experience the recipient often doesn’t feel positive. Instead, they will be more likely to internalise the toxically optimistic message and end up judging themselves for being in a negative state of pain, fear, regret or sadness. This can leave them feeling confused about what they ‘should’ be feeling, as well as shamed for what they are feeling. In other words, we are left feeling awful about feeling awful, or inadequate for not being able to access happiness. This process of meta-emotion, or having a feeling about a feeling, can keep us stuck in a quagmire of emotion, unsure about how to proceed. Unrelenting optimism, which propels us to suppress negative emotional states, ultimately only makes us feel worse.

Not long ago, when I asked my mum about her work, she sighed and slumped in her seat. She says she’s been finding it exhausting and her colleagues completely undermining. At first, I thought she was alluding to some sort of workplace bullying, though she told me it’s quite the opposite. She explained to me that nobody can do anything without the whole office congratulating one another; “I am applauded and told how great I am when I return from the bathroom or reply to an email.” She said that rather than this highly encouraging and positive culture feeling supportive, instead she feels like she could never turn to anyone with a problem, grievance, or to seek constructive criticism. That to do so would be socially unacceptable – and it is exhausting.

My mother’s experience is indicative of a broader trend in Western Culture that defines positivity as an attractive behaviour; one that makes us appear ‘well-adapted’ and more popular with our colleagues and peers. Clinical Health director, Natalie Dattilo, says “it results from our tendency to undervalue negative emotional experiences, and overvalue positive ones”. This valuing of positivity places a particular emphasis on happiness, and also implies that there is a right way to feel (happy) and wrong way to feel (anything other than happy or optimistic). Dattilo, along with many other experts, says it’s high time to ditch the rose-coloured glasses and accept it’s okay to not be okay.

There are circumstances that positivity cannot heal, but we can learn or understand from them

We must be careful with the use of optimistic language and think of the context and potential impact our positivity can have. Some people’s situations are plainly devastating. Experiences such as illness, food insecurity, racial injustice, homelessness, and unemployment are usually out of the person’s hands, and they may not have the privilege of being able to ‘look on the bright side’. We must be careful not to invalidate those who are experiencing a very serious and valid moment of pain and hopelessness.

The antidote to toxic positivity lies in ‘tragic optimism’, which was first coined by an Austrian psychologist and Holocaust survivor, Victor Frankl, in 1985. It posits that it is healthy to experience both positive and negative emotional states; that they are equally relevant and necessary to our growth.

Experts are on board, suggesting that this philosophy is what we need to cope with the challenges the modern world is throwing at us with COVID-19, climate catastrophe, civil unrest, and social injustice. Positivity isn’t going to make these realities disappear, in fact, to believe this is unrealistic bordering on delusional. Instead of dismissing struggle and pain, we should acknowledge our discomfort about these topics as understandable and valid, and let ourselves feel the feelings. Then, see if there’s something we can learn or understand from the situation and feeling, that we can take into the future.

Toxic positivity can be subtle, so familiarise yourself with the signs

Like many normalised behaviours of our culture, toxic positivity can be subtle and difficult to identify. Some of the signs include:

It is essential and up to each of us to normalise our emotions by experiencing them as they come, and letting others do so too. If these happen to be negative emotional states, they should be allowed to occur, free of any kind of expectation that we ought to feel better.

The end of the podcast coincides neatly with the arrival at my destination. The lady behind the sleek counter is the same lady who sold my first bike to me. I remember the way she said ‘Congratulations!’ to me when the payment went through, and I thought to myself, “this must be what it’s like to buy a car”.

Today, when I tap my bankcard and enter my pin, she doesn’t congratulate me. Instead, as she asks ‘Do you have insurance?’, I vividly recall how winded I was that day and the weeks that followed learning my two-week-old, three-thousand-dollar bike had been stolen. I was so discouraged, and I resented the way people told me it could be worse and that if I manifest hard enough it will surely come back. In the same way my sister stood there yesterday evening, it was jaw-tightening-mind-gratingly insulting.

Of course, I recognised at the end of the day it is just a material object. I exercised perspective and recognised it really could be worse. But that was after a couple of weeks in which I let myself sulk, let myself feel how bad it was. I needed that time to feel my disappointment, so that I could then move on from it. As I ride off today, I am extra grateful for the bike I am sitting on, and, because I know how bad it felt those weeks after the theft, I have learnt some valuable lessons. I ride away with my name and number engraved into the bike as well as two insurance policies, three locks and a hell of a lot of hindsight.

For more information on the pitfalls of the unrelenting pursuit of happiness, check out The Happiness Trap, by Russ Harris. The Radio National podcast referenced in this article can be found here.